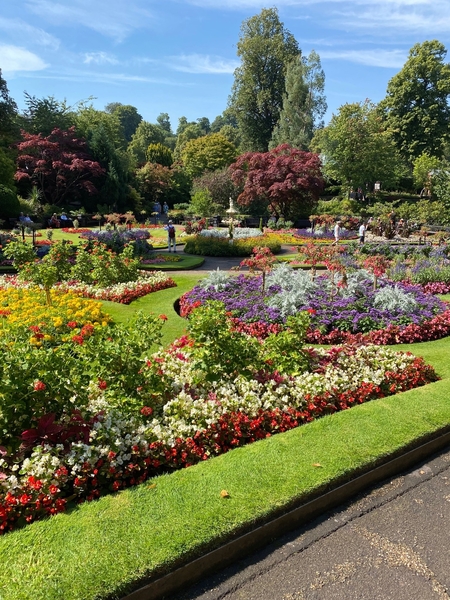 Bamboo treatment has started...
The first phase of the bamboo spray treatment was carried out on Wednesday 24th August, by Brian Taylor of the Knotweed Company. He anticipates a second treatment taking place in the Autumn, and the cutting of the dead stems during the winter months, with grinding of the bamboo roots carried out soon after. The planting of annuals can take place in the spring to see us through the summer, and some permanent planting in the Autumn of 2023.

The second phase of spray treatment in the north garden will take place in the summer of 2023, the third phase in the north and south gardens will be done in 2024. Further interim treatment will be on-going until we eradicate the targeted areas of bamboo and allow other plants to flourish. Watch this space!

Network Rail (NR) - overgrown vegetation
NR customer services has been contacted on a number of occasions to report concerns we have about invasive vegetation, (mainly buddleia) surrounding The Old Meadow (TOM), from the perimeter of the NR access road and beyond. This vegetation spreads the seeds of plants that invade TOM and settle in our grounds and crevices in buildings. In the case of buddleia, the concern is growth in bricks and guttering, as is seen in many buildings around the town.

The emails resulted in a visit from the NR Maintenance Protection Coordinator for Wales and the Borders on 25th August. The overgrowth of vegetation was discussed and he stated that NR is legally bound to remove invasive vegetation growing over the perimeter fence that affects the estate.
His main area of concern was the willow tree and some of the buddleia that has been allowed to proliferate and engulf specimen trees at the north end of the estate. We also discussed with him how the recent hot weather has raised people's anxiety over the risk of fire, which could be caused by the dried up foliage, mainly of buddleia. We look forward to some action in the autumn.
Gerry Smith (RMC)