The history of The Old Meadow

The Old Meadow was formerly named The Gay Meadow.

On the banks of the River Severn, the ground was surrounded by trees and parkland, with the town centre towering above the ground on the hilltop behind.

The origin of the name, The Gay Meadow, is not entirely clear, although it is widely believed to be related to its use for entertainment purposes, for fairs, carnivals and circuses. If you are a fan of The Cadfael Chronicles you will know that when Ellis Peters wrote the historic murder mysteries she was inspired by medieval Shrewsbury and made Shrewsbury and The Abbey home to her fictional character the Benedictine monk, brother Cadfael. There is reference to The Gaye, an orchard area setback from the river providing plums, apples, cherries and pears for the abbey. Some say that the land was originally owned by the Gay family.

It was certainly known as The Gay Meadow in 1642. Within The Shropshire archives you can see an etching of King Charles I addressing the loyal Shrewsbury gentry at The Gay Meadow.

In 1740, stuntman Robert Cadman, a 'steeple-flyer', attempted to 'fly' across the River Severn using a rope attached to St Mary's Church steeple and attached to a tree across the river at the Gay Meadow, some two hundred feet below. Tragically for Cadman the rope broke and he plunged to his death. 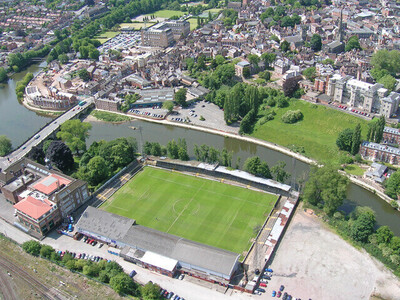 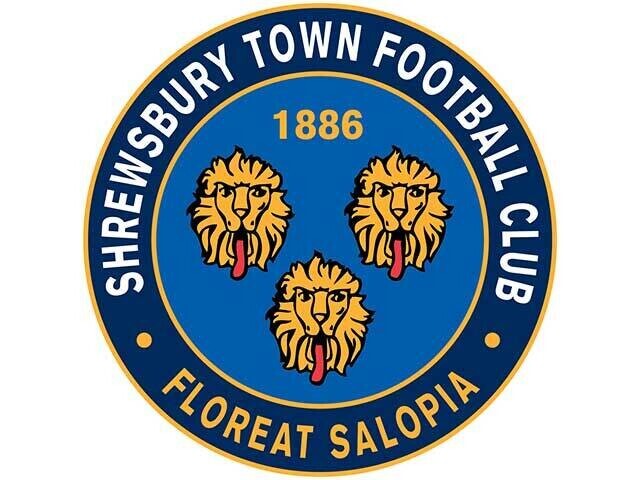 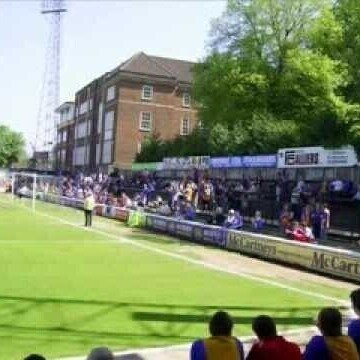 For many years, Shrewsbury coracle maker Fred Davies would sit in his coracle during STFC home matches and retrieve stray footballs from the River Severn. Although Mr Davies died long ago, his legend is still associated with the club and our development.

STFC is known as The Blue and Amber Army - the club's colours. We believe that the amber was added to team socks c1935 and then re-appeared in1968. The amber or yellow has been included in the club's strip ever since. There is a thought that the yellow and blue colours of the club's badges were chosen as these represent the colours of Roger de Montgomery, Earl of Shrewsbury. The three leopards' heads known as loggerheads derive from the Royal Arms of England.

Hence Amber Rise and why all our doors are painted blue! If anyone knows better or more please let us know.

The end of The Gay Meadow

The demolition of the stadium began in September 2007. Before demolition, fans were given the opportunity to play on the pitch, in specially arranged friendly matches, and an auction was staged at the ground on 17 June 2007, where more than 200 items were auctioned.

When the ground was almost completely demolished, a charity zip-wire event was held on 14 October 2007. More than 100 townspeople 'flew' from the St. Mary's area of the town centre, over the River Severn to land on the Gay Meadow pitch, emulating Robert Cadman's heroic attempt in 1740. In addition, sections of the Gay Meadow turf were sold for a small fee for Severn Hospice, the organising charity. This was the final public event to ever take place at Gay Meadow before the re-development of the site.

When designing The Old Meadow, Andrew Arrol RIBA AABC, the award-winning architect of Shrewsbury's "Arrol Architects Limited", immediately saw that the new estate would be of critical townscape and landscape importance.

Consequently the architect carefully crafted his designs so that the new estate would blend sympathetically with the late 18th and early 19th century Georgian architecture for which Shrewsbury is renowned.

In this regard the architect's vision is reflected in the style of the estate's timber windows, his choice of bricks, the cornice design with stone details, the traditional cast iron railings and elegant columns, to other touches such as the lamp-posts and the dwellings' exterior lights which emulate an old gas lantern.

At the foot of this page are two drawings created to reflect the architect's vision of the new estate.
They were prepared by Mr. Arrol's colleague James Wade.

The Old Meadow was designed to withstand the impact of climate change and make certain it was safe over its lifetime as well as ensuring that it did not act to increase flood risk elsewhere. These aims were achieved by raising the floor level of the homes and moving them back from the river as well as incorporating natural flood storage areas in the shape of the communal gardens. In February 2020 the river burst its banks and rose in excess of 12 feet - the highest level for 20 years. But due to the measures taken in the careful design of the estate we were left comfortably high and dry.

Work on the gardens began in 2013, at that time The Old Meadow was known as Riverside Meadow. The project was therefore named the Riverside Project and was undertaken by Keary Design associates of Leicester, headed by David Keary, Chartered Landscape Architect.

The project called for the defining, designing and refining of landscape plans for the site built on the old Shrewsbury Town Football Ground.
Nestled on the banks of the River Severn, the development blends into the outlying natural environment with considered and thoughtful plant selection, landscape form and flow. Visual impacts from across the river, alongside the river and from the residents' perspective were given equal preference.
Keary Design Associates provided the masterplan and detailed soft landscape plan to create the highest quality courtyard and communal space whilst preserving the natural aspect of the riverside walk and alleviating the flood impact in the adopted public open space.
Meadow mixes, tree species and ornamental plant selection was critical, finding plants that would not be compromised by regular flooding but would also thrive in well-drained soils on raised terraces. Plants within the courtyard where chosen at a scale and form appropriate to their confined location.
The design itself is asymmetrical to maximise the south-facing aspect for sunlight and ensure courtyard planting avoids the shadows cast by the surrounding buildings.
The scheme integrates pathways and planting on steep and undulating banks. The design comes to a crescendo in a central focal point and community area for the residents and seating.
Its outlying areas are given height and form from statement trees along the riverbank. Tree species selection provides continuity of existing exotic varieties used in the neighbouring botanical gardens - including taxodium distichum and liquidambar styraciflua.

Caring for the gardens

At a point prior to the developer David Wilson Homes leaving the site in 2014, local gardening contractors, Limetree Landscapes, of Wellington, were appointed to carry out routine maintenance of the gardens. The small local company led by Malcolm Shambley, its proprietor, continue to carry out this role. The Limetree team are on site on Fridays of most weeks throughout the year carrying out an agreed schedule of work, including mowing the lawned areas, pruning, weeding and clearing pathways. Their work extends beyond the two courtyard gardens to include the many feature beds and borders around the development.

One director of The RMC has responsibility for the gardens and acts as the liaison person, on behalf of residents, with the contractor. 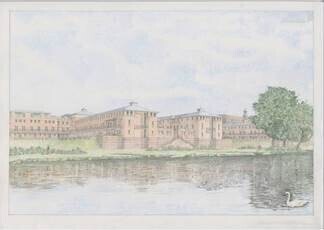 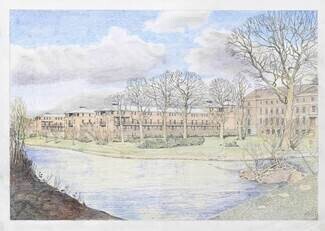 The eight four-storey Mallard townhouses have terraces and sun rooms at roof level and it is believed that the configuration of the top floor windows is based on the historic Severn Bridge Junction signal box (just south of the station), which is the largest operational mechanical signal box in the world.

The signal box (now a grade II listed building) was built in 1903 from a design of 1876 and was operative a year later. It was necessary because five different lines converged here. It still performs and important task, and it the largest operational mechanical signal box in the world. It is now owned by Network Rail, and at night when sometimes all its lights are on, it makes for a mystical sight.

Railway buffs will know that there was once a Shrewsbury Abbey railway station (the site can still be seen). It opened in 1866 as the temporary end of the Potteries, Shrewsbury and North Wales railway line. On some pictures it's called the Shropshire and Montgomery railway station. Built on the site of a monastery it was never connected to Shrewsbury station and closed in 1880, before a planned railway extension to Market Drayton could be built. 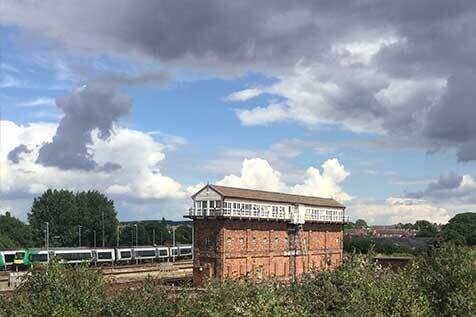 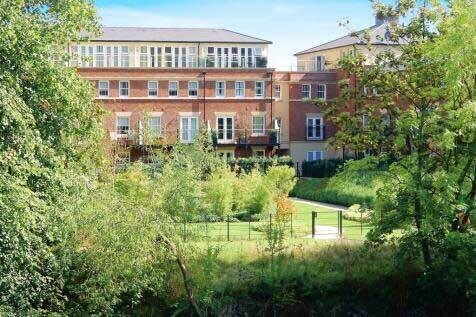 Roger de Montgomery was a cousin of William the Conqueror, and led the Norman right wing at the Battle of Hastings. In 1071 William I named Roger the 1st Earl of Shrewsbury. He began building the imposing castle across the Severn, and established a new monastery, Shrewsbury Abbey, on the site of a Saxon church.

Charles Robert Darwin was an English naturalist, geologist and biologist, best known for his contributions to the science of evolution. He was born in Shrewsbury, Shropshire, on 12 February 1809, at his family's home, The Mount. He was the fifth of six children of wealthy society doctor and financier Robert Darwin and Susannah Darwin (née Wedgwood). His grandfathers Erasmus Darwin and Josiah Wedgwood were both prominent abolitionists. Charles was baptised in November 1809 in the Anglican St Chad's Church, Shrewsbury, but Charles and his siblings attended the Unitarian chapel with their mother. He attended Shrewsbury School (now the town library) from 1818 to 1825. There is a bronze statue outside The Library which was sculptured by Horace Mountford.

Darwin's curiosity, natural inquisitiveness and desire to understand his world led to his voyage of discovery on HMS Beagle in 1831. His best known books are The Voyage of The Beagle, The Origin of Species and The Descent of Man.

The river loops around Shrewsbury town and The Old Meadow is located on her banks between The English Bridge and the weir.

Completion of the construction of The Old Meadow

The first residents moved here part way through construction in 2012.

The construction of the estate was completed in 2015. 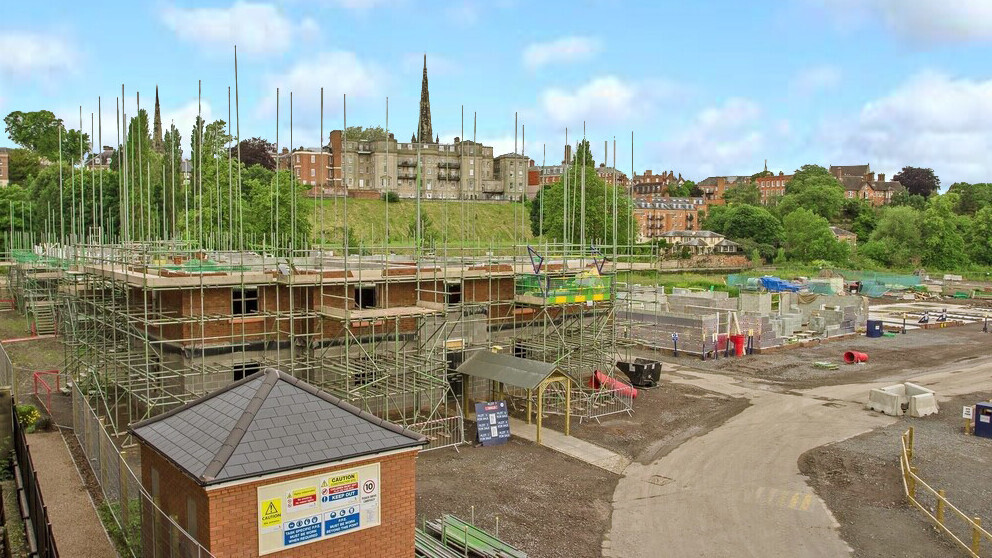